share
"If I could describe Durga Puja to you in one word, it would be UNBELIVEABLE!"

This past week was Durga Puja, and the city awoke and emerged out from the gray clouds of the monsoon season to celebrate the triumph of good over evil.  Many artists, carpenters, and workers from surrounding villages came together to decorate Kolkata with colourful displays of light, exuberant ornamental places of worship (pandals), and gorgeous detailed clay statues of the goddess. Durga Puja is the ceremonial worship of the ten-armed mother goddess, and one of the most important festivals in India.

The story tells us that during the torments on earth by the evil demon Manishna the prayers of the people were answered when Lord Shiva, Vishnu, and Brahma used their radiant energies to create a godly energy in the form of a divine lady with a thousand arms.  This was Durga Devi.  In each arm she carries a weapon belonging to all Gods and uses a lion as a form of transportation.  Durga created a large army from her breath to fight Manishna's army eventually defeating him and killing him with her sword.  The earth was liberated from evil, its peace restored.

In Durga, the Gods bestowed their powers to create a beautiful goddess with ten arms, each carrying their most lethal weapon.  The tableau of Durga features her four children - Ganesh, Lakshmi, Sawaswati, and Biswakarma.

The beauty of Durga Puja is that all of Kolkata work together to transform the city into a glorious glittering dreamland.  Artists and influential architects complete in creating huge temporary canopies known as pandals, which house the icons.  The pandals are innovative by depicting themes that address modern day concerns, everything from recycling to female rights.  They are basically huge works of art and a visual spectacle for all who go 'pandal-hopping' during the festival.  It's amazing how quickly these structures are built.  In our neighbourhood one of Kolkata's most elaborate pandals (Sinhgi Park Pandal) was being built.  From the wee early morning, on our way to work, we would see at least 8-10 workers carving and painting, and by the time we arrived in the evening the workers would have multiplied to about 20, all working together as a team putting together the huge puzzle pieces of the pandal.  It took them less than two weeks!

Everyone, absolutely everyone, from old to young take part in the festivities.  Even the only foreigners on Dover Lane (us!) ventured out during the nights for some 'pandal-hopping.'  Of course we stuck out like a sore thumb, but that made the experience even more enjoyable.  People were soo happy to see us taking part in their celebrations, they would go out of their way to greet us, ask where we were from, and even take pictures with us.  They made it their goal to show us the best of the Puha by directing us to the best pandals.  One of the most memorable moments was the night we decided to get Mehndi (Henna).  The puja crowds in our neighbourhood were soo entertained as we walked through them holding our recently painted hands in front of us to avoid smudging.  To conclude, Durga Puja was like no other festival I have experienced, it was as Lindsay puts it "Like Disneyland, The Olympics, Christmas and an art gallery all in one", but what I enjoyed the most was to see the different roles and collaborations between different people in celebrating human's perseverance agains the world's evils. 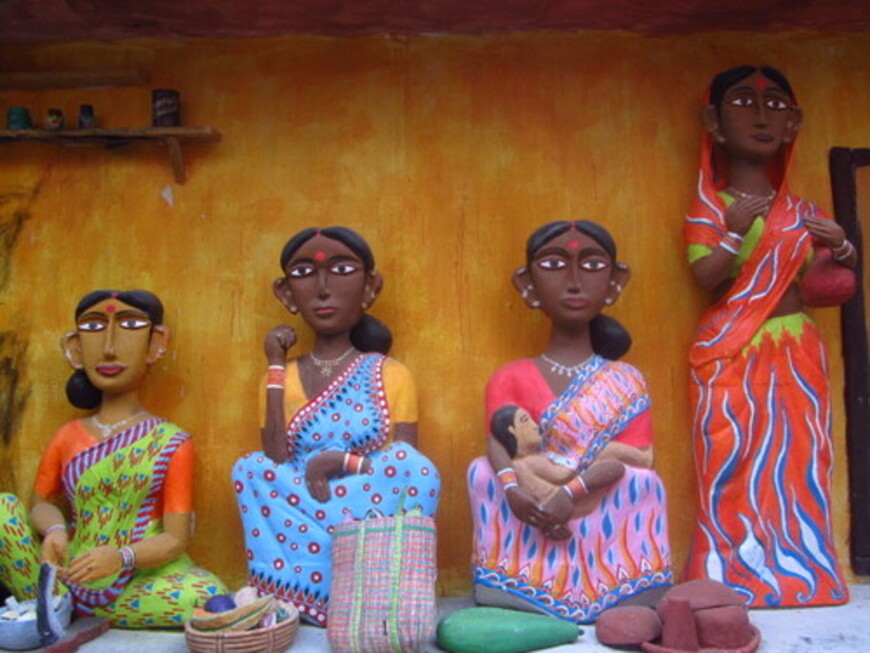 Just for fun, on a Wednesday afternoon, we took the metro to North Kolkata to discover a part of the city we have not visited yet. Without a planned route, we walked south in the direction of home. Approximately every 5 blocks we would find a pandal to visit. One such pandal blew all of us away.

At the entrance of the pandal, there were images of women in tradition Indian dress. These women were depicted filling their expected gender roles such as, cocking and taking care of babies and children. As we walked further, there were images of modern day women as athletes, doctors and astronauts. In the interior of the pandal was of course the statue of goddess Durga, and along the walls there were images of devalued women: a women begging on the street, a women committing suicide by hanging herself, a women outweighed by money (I interpreted it as a women being sold into the sex trade).

Many gods combined their energies to create the goddess Durga who fights against evil. During our Gender and Health seminar, Dr. Rochelle Tucker explained that this pandal represented the goddess Durga fighting against the social and cultural norms that devalue women in India. In other words, this community in North Kolkata collaborated to design and install a pandal that draws attention to the current issue of gender equity and women’s rights in India (and around the world).

Puja is an excellent time to disseminate information to the public, especially since the streets are full of people pandal hopping. The “Women’s Rights” pandal is a good example of how pandals have been used to draw people’s attention to current issues, or present day “evils of the world.” Outside of a few pandals in South Kolkata, people were giving out health promotional pamphlets on preventing the spread of HIV AIDS, and on health behaviour that prevents against heart diseases.

Large advertizing agencies have caught on, so Puja has become quite commercialized. New advertisements were pasted on the large billboards and the entrances to large pandals were pasted with ads for Vodaphone, Mountain Dew, Garnier, Vivel soap, Dove, and Oreos. 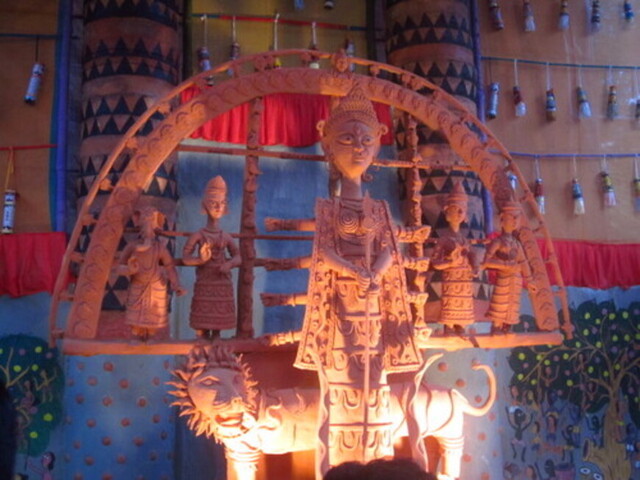 If I could describe Durga Puja to you in one word, it would be UNBELIVEABLE! In the list of unbelievable things I have seen in my life, I think it ranks at number 3.

In the next few weeks I’ll be adding the Taj Mahal and the Golden Temple to this list, so soon I will have a top 5! If I could describe Durga Puja to you in 5 words it would be Disneyland + the Olympics + Christmas + an art gallery (ok I realize that’s technically 7 words for all you nitpicky folks out there...). Let me explain.

It’s traditional to buy gifts for your loved ones during Durga Puja. How commercialized the festival is. This caught me by complete surprise. I did not expect to find religious idols surrounded by Oreo cookie and Vivel soap adds, especially in India. The lights -> There were strings and strings of lights everywhere, as well as trees decorated with lights, which immediately reminded me of Christmas...a very very hot Christmas. An art gallery, or more like the ENTIRE city was turned into an art gallery. Durga Puja is by far the BEST display of modern art I have ever seen! For all you art lovers out there, Durga Puja is something you absolutely must see before you die. Put it on your bucket list now! Here are some photos of the best pandals that we saw: 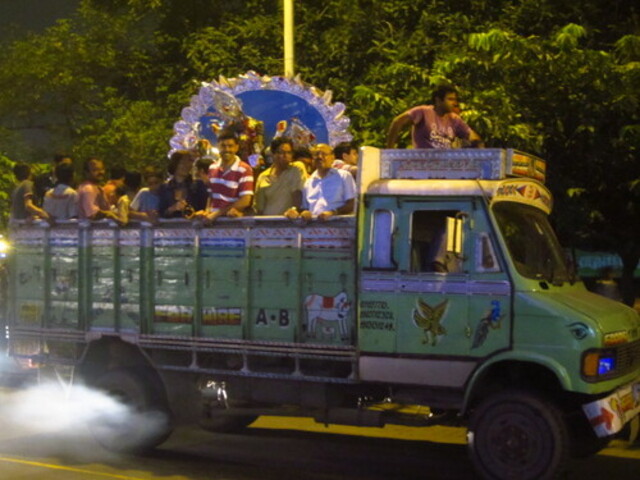 I agree with Lindsay that Durga Puja was unbelievable. If you ever have the opportunity to be immersed into this high energy celebration where you get to interact with locals, see hundreds religious monuments and attend carnivals, I recommend that you take it. Durga Puja was one of the special events I attended in my life, but I especially appreciated and enjoyed this religious week when it was coming to an end.
Although the pandals were creative masterpieces that raised awareness about social issues, people and children were lively during carnivals and street shows, and individuals clearly worshipped the goddess Durga and what she represented, I could not shake that the funds and effort that went into this could be used for alternative interventions. In my opinion Durga Puja has become highly commercialized which took away from the primary aim of the religious celebration. These globalized sponsors created a pandal competition amongst the local districts. Hence, neighbourhoods became aggressive in creating the most elaborate religious statue. Although I appreciated the time, precision and meticulous nature that went into creating the pandals, each time I entered one I had a little voice in my head about the other issues that plague India. Kolkata alone has a poverty rate that exceeds 52%, many children are not attending schools, the unemployment rate is skyrocketing, there is no sanitation system, the healthcare system only caters to the upper class (the public health care system is inefficient) and people are dying due to starvation. If the money and energy that was expended on Durga Puja was invested in some of these social issues many health concerns could be averted.

I was not content when Puja came to an end because of the moral difficulties I was having, but because I had the opportunity to experience the submersions of the pandals. After six days of music, chanting, lights, crowds, ice cream, and dance performances, people transport the Durga monuments to the Houghly River where she is submerged into the blessed waters. Dr. Ro, Minal, Ayanna and the rest of us rented a private boat during sunset to get closer to the action. Men would carry Durga on their backs; they would spin three times in order to show her off one last time. She was then carried down the steps to the bottom of the river where she was thrown into the sacred waters. Eventually she would be weighed down by bricks, but for the time being these statues would float on the water surrounding our boat. The men would later dunk themselves into the holy river to become more spiritually connected. During the submersions there was no marketing, no products were sold, there were no flashy lights; rather people chanted and drummed while trucks carrying 20 plus individuals with the goddess continued to arrive at the river. This portion of the Puja was raw, purely spiritual, the way it has occurred for centuries before we came to India. 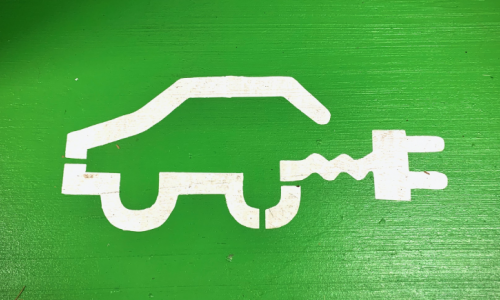 While it may seem daunting to move or travel to a new place and maintain a sustainable lifestyle when you don’t have personal and cultural resources at your fingertips, there are several ways that you can practice sustainability while travelling and living abroad. 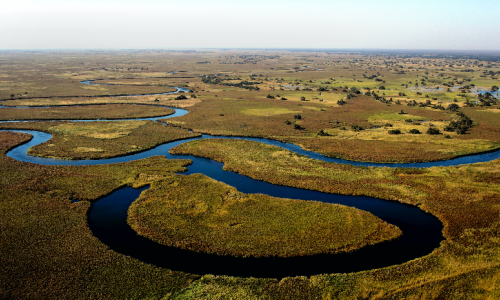 SFU Kinesiology student Kayla Donnawell is in Botswana, Africa volunteering with the Students Without Borders program (SWB). In this article, the fifth in the series, Kayla swims the Delta, meets elephants and chased by a hippo. 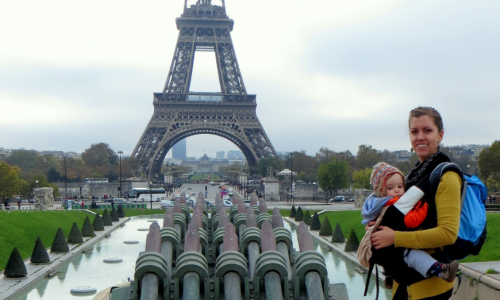 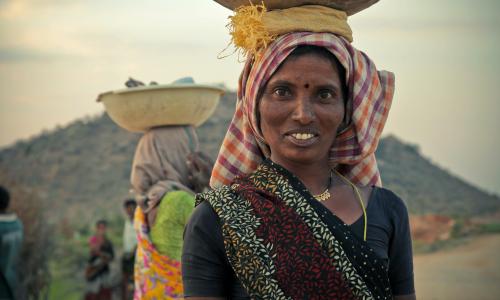