Don’t forget where you came from, and if given the opportunity to take someone by the hand and help them, it’s personally rewarding! (I will always be grateful for those who believed in me and helped my career out.)

Crystal Morris
UBC School of Population + Public Health
Aboriginal Education Coordinator
Crystal Morris is First Nations, from Interior Splatsin, Shuswap Nation and from Vancouver Island Tsartlip, Saanicton Nation. She began her career in Finance and Band Administration and worked her way in various capacities in her band, including the health department. More recently, Crystal was employed by the First Nation Health Society as Regional Governance Liaison for the Interior of BC. Crystal's education includes a Business Administration diploma, a major in Accounting, in 1996 from Okanagan College in Vernon. Crystal's current role is the Aboriginal Education Coordinator for the School of Population & Public Health at UBC. One of her goals is to build bridges with Aboriginal communities and universities to support career choices for Aboriginal Youth.

The University of Northern British Columbia is partnering with the National Association of Friendship Centres (NAFC), government ministries, and regional research centres across Canada to develop the Urban Aboriginal Knowledge Network (UAKN) and research the policies and issues that affect Canada’s city-dwelling aboriginal population. 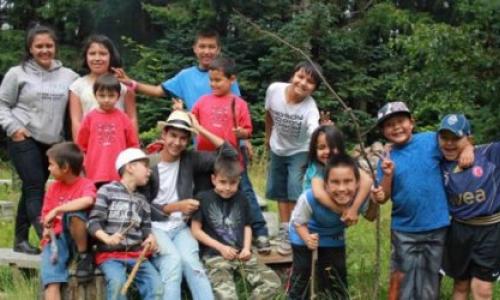 Christina Coolidge is an Indigenous Program researcher with Career Services at SFU.  In this four-part series she shares how Indigenous women are the keepers of language and discusses various issues and topics around language in the Indigenous community.  This is the first of the four part series.