Home
/
Blog
/
A Walk to Remember

A Walk to Remember

share
I did not see apathy today. I did not see anger or misunderstanding. I saw hope. I saw forgiveness. I saw unification. I saw joy.

I admit I had some misgivings about the Truth and Reconciliation events happening in Vancouver this week. There are so many layers to unravel and so many systems involved that I couldn’t decide where I belong on the spectrum, for or opposed, to this process. I took some time to reflect on what the purposes of the Truth and Reconciliation Commission are, as well as who I am, in order to make a decision on whether or not to participate. I still acknowledge that there are some political agendas behind this event, particularly in the form of funding. There are also many people with their own and valid reasons for choosing not to support this event. My own spiritual beliefs and who I am as a human being led me toward the walk instead of away from it. I had to concede that if only one survivor of the residential school system found healing this week, then the entire event would have been an enormous success. I believe that Creator is leading those who are seeking justice and restoration of their nationhood, those seeking truth and freedom from oppression, and those seeking healing. I was there to honour the latter. I was there to discover my place in this historical process as well as to claim my responsibilities toward my community and toward my earth, to which I belong.

There were different options for survivors this week and to describe them here feels as if it might pollute the experience somehow, so I choose not to go into great detail about that. I will relay an experience to you from my dear friend. He arrived at the PNE grounds on Saturday afternoon, but he walked into the wrong building. He stood near the doorway for a moment and just as he was getting ready to leave a woman volunteer approached him and asked him if he was there to make a disclosure. He said he thought about it for a moment and said, ‘okay.’ When he was finished making his disclosure, the woman told him that she had been sitting down eating her lunch when she saw him walk in the room. She said as she looked at him she saw a lost little boy instead of the grown man that he is and she knew she had to reach him before he walked out the door. She abandoned her lunch and rushed over to him before he made his escape. He has been unsure recently about whether he will be able to endure the court process but after making his disclosure, he says now he knows that he can do it.

Then on Sunday morning I gathered with my SFU team led by our Team Captain and SFU President, Andrew Petter. I have been profoundly moved by the willingness of SFU’s administration to make changes for the betterment of Aboriginal People. Their support has earned my respect and I am sure the respect of many others. I would like to say a special thank you to Clay Gray for his efforts in gathering SFU students and faculty together for the walk today. They were not in vain and his voice has been heard.

As a group, we found ourselves at the starting point of today’s walk where tens of thousands of people stood together in the rain, listening to Dr. Bernice King. She spoke the words of her father Martin Luther King, “I have a dream.” She spoke of non-violent social action. She spoke of love. She spoke of hate. “Hate destroys the hater, not the hated. Hate the oppression, love the oppressor.” She said, “Change is slow. It first has to change the heart of the oppressed before it changes the heart of the oppressor but there will come a day when you will be able to say, in the words of my father, ‘free at last, free at last, thank God all mighty, we are free at last’.”

Then we began to walk. 70,000 people unified for a single, greater purpose, listening to a choir sing, Oh Happy Day. We walked down one side of the Georgia viaduct and back up the other side. What this did was allow us to see the entire procession as they walked back up the viaduct beside us. It kept going and going and going. It was thrilling, heartwarming, heartbreaking, breathtaking . I have never felt as much hope, as much gratitude, as much joy, and as much sorrow as I did witnessing all those people come together, from every colour of the medicine wheel in order to say, ‘we see you’.

And as the end of the line went passed us, I saw an elder walking very slowly, holding the arm of a younger man, perhaps her grandson. And as she walked she waved at us walking past her. She cried and cried tears of joy as you could see the look of wonder on her face at the thousands and thousands of people who walked for her. It was in that moment, seeing people walk ahead of me, behind me, beside me, beneath me on the street below. I was surrounded by people walking and this elder’s face said more than any words ever could and I was overwhelmed with all that that meant; to my mother, who walked beside me, who always walks beside me, to my father, to my brothers and sisters, to my grandmother, to my cousins, to my aunties and uncle, to my many friends, to my ancestors and to me. I thought about those children lost and alone, angry and frightened. I thought about my friend walking beside me, so much more than a survivor. I thought about the children laying in unmarked graves and the parents and communities who still grieve. I thought about all the lost souls on Hastings, still trying to survive. I thought about the pain and the loss and found the rain a comfort and representative of all the tears, throughout all the years, as it began to wash away some of that sorrow.

I did not see apathy today. I did not see anger or misunderstanding. I saw hope. I saw forgiveness. I saw unification. I saw joy. I am left feeling overwhelmed and know that this is just the beginning of something much bigger than I. Bernice King said, “We are never truly free. There will always be someone being oppressed and what happens to one happens to us all.” I believe that and I pray Creator gives me the strength and the grace to always stand on the right side of history. We are responsible for one another. Walk with love, always. I know we did today. 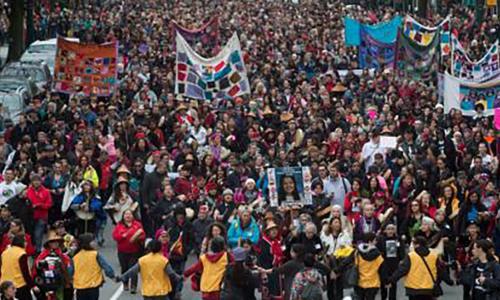 Dr. Sarah Hunt As an ally to sex workers, Sarah seeks to strengthen relationships between Indigenous sex workers and other members of Indigenous communities in order to confront the stigma and criminalization which contributes to increased violence. 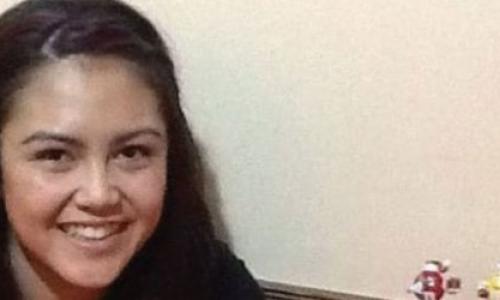