share
Thanks to this goal, I've been motivated to look for volunteer counselling opportunities in the community, to keep my skills sharp and diversify my counselling experience before jumping out on my own.

I was supposed to be an astronaut by now.

At least, that's what six year old Dave would have you believe. He had some other ideas that didn't pan out, too (that giant house made of Lego would have been nice), but I won't blame him for being imaginative.

It didn't stop there, though. Did I mention I was only able to get out of the restaurant industry for good the third time I quit? I was also supposed to finish university in four years - didn't happen. Finish my master's degree in two more? No sir. That shiny, thriving private practice I told myself I would be running today didn't happen, either.

You might think, given my past rantings on such things as happenstance, chaos theory, and the general unpredictability of life and the world, that I would be opposed to any sort of goal-setting or similar such planful (yes, it is a word) activities. After all, as the saying goes where I work, "there is no plan." Here's the thing though: while I've certainly come up with some goals that weren't quite SMART over the years, and I am very much a take-it-as-it-comes kind of person, I actually think that - under certain circumstances - setting goals can be an interesting and occasionally useful activity.

Wait - doesn't that conflict with the whole 'embrace change and uncertainty' thing that I'm always talking about?

It would, but only if you thought of goals and plans like instruction manuals for your life (you want to click that link, trust me), to be put together step by step. As it happens, I am not a piece of Ikea furniture (though I could see "Lindsköög"  as an Ikea product name... maybe a desk chair? A coat rack?).  I suppose I would think of good goals more like road maps - in most cases, there are many ways to get to a destination, and lots of things that might happen during your travels could change how you arrive at that destination, or even the destination itself. Some goals would be more strict that others, requiring you to follow a very specific series of routes, while others could be achieved by dozens of potential route combinations.

But even that doesn't really capture it for me. The thing is, unlike what I suspect is most people's approach to planning, I don't set goals for the sake of the future - I set them to benefit in the present. Here's why: I've set enough goals that haven't come to fruition to know that they're not going to be an accurate predictor of my life in the future. But the very act of goal-setting can be surprisingly motivating, and often leads to taking meaningful action in the present.

So, with that in mind, I'd like to share with you a goal that I may or may not achieve this year, and - more importantly - how it's already paying off in the here and now.

This one's been on my radar for several years, but the timing would appear to be perfect around summer time this year, when I'm projected to be at work for four days a week. That leaves one day a week open to play around with the unfamiliar and not-insignificantly risky business of opening a practice, without sacrificing any much-needed financial stability.

How's it paying off already? Thanks to this goal, I've been motivated to look for volunteer counselling opportunities in the community, to keep my skills sharp and diversify my counselling experience before jumping out on my own.

I'll likely have more on the progress of this goal, and the actions it's inspired, as things develop.

As for this entry, I think I'll close with a "more you know" moment:

Goals are much more likely to be achieved if you write them down. I wonder if that's even more so if it's in a public forum, such as a blog? 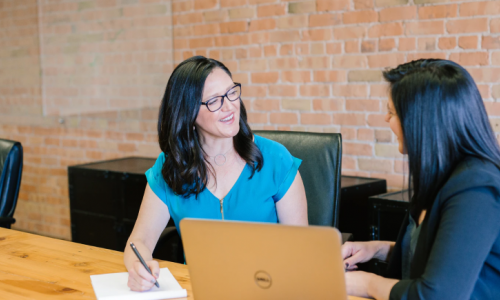 Get An Edge In Your Career Through Mentorship
Leadership

Having someone who is willing to share their experience with you can make a big difference, however cliché that may sound. Despite many obvious benefits, mentorship has been cited as one of the least-utilized tools for advancing one’s career. With that in mind, learn how to form and sustain a meaningful relationship with your potential mentor.

Team Work Works: The Story Behind the Photo
Leadership